April Dog of the Month; Bubba!! 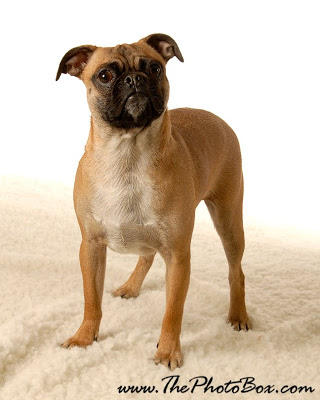 Bubba is a Pug and Boston Terrier Mix, often called a “Bug”. He has been visiting Ruffledale since he was just a teeny tiny little 4 month old puppy. He was so adorable and extra wild. He quickly made friends with the daycare’s largest attendant “Charlie.” The two of them are so funny together. Bubba pins the great dane/mastiff mix down and Charlie will pick Bubba up gently in his mouth. The two are still inseparable and spend the majority of their time here at Ruffledale together. They are the best of buddies. When Bubba’s Mom pulls up in the morning he is so excited, you can see him standing on the dash of the car ready to jump at any opportunity to get in the building!!

Bubba Absolutely Loves Bacon! It is the best treat he can imagine…… Nothing could even compare to Bacon! Bubba will do anything for Bacon including his Coooolest Trick; “Play Dead.” Bubba also loved tennis balls. Any size or color of Tennis Ball is great for Bubba. Bacon covered Tennis Balls are something he thinks should be created! ☺ Bubba always loves to be the center of attention. He would love it if you would spend all day rubbing his back and belly. Although Bubba loves attention, he is not very impressed if you interrupt his naps. He will give you “The Look” if you try to move him. “The Look” is very angry and sleepy and irritated.

Bubba’s fist day at his new home was in December. It was very cold and Bubba was just a little guy. He was confused and a little scared, but his new Mommy and Daddy took extra special care of him to make sure he liked his new home. When Bedtime came around they put Bubba in a kennel or “cage” as Bubba thinks of it. Bubba decided at that time that a “cage” was not going to work for him… Bubba cried for 2 hours in his “cage” and then his new parents decided that Bubba should join them in their very comfortable and fluffy bed. That worked much better for Bubba. Bubba also loves it when his parents take him on any car ride since cars usually go to fun places like Daycare or the Dog Park. Only occasionally cars go to sucky places like the Vet.

Bubba is an extremely happy dog. He loves all dogs and people. Bubba thinks that he is a big dog and has most of the dogs at daycare convinced that he is a big dog too. He is always happy and excited. Life is good if you are Bubba. Bubba doesn’t just wag his tail when he is excited, but he does the whole body wiggle! Bubba is so silly and ecstatic all the time that you can’t help but smile and be happy when he is around. Bubba brings a happy go lucky and spunky attitude to Ruffledale that makes daycare that much better!