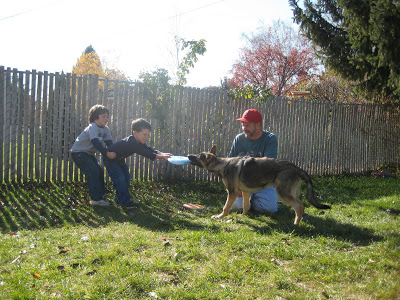 Buster McGee is a almost 3 year old German Shepherd Dog. His birthday is coming up on May 5th. He has been coming to Ruffledale since he was a ten month old puppy…Wow! Time sure flies and he is still the same silly Puppy that he was back then! He LOVES to play with all of his other doggie friends here at daycare. Buster McGee also has a girlfriend here, a golden retriever named Gracie. Gracie was the dog of the month back in June of 2009.  Gracie and Buster McGee both come on Wednesday’s and romp and play all day together. They definitely hold a special place in each other’s hearts. ❤

Buster McGee is an all around playful dog…He especially loves days when his Dad wakes up bright and early and takes him to play with his favorite toy….THE FRISBEE!!! Or more accurately a couple of Frisbee’s. Buster McGee’s Dad has to have at least two frisbees because once he has caught one the only way to get him to give it up is to throw another frisbee that is more exciting to chase.  Buster McGee will chase Frisbee’s back and forth for hours running over anything that gets in his path of his Frisbee chasing. After all the Frisbee chasing Buster McGee will need a recovery nap, then a long walk and if he’s lucky some more Frisbee chasing in the back yard until bedtime!

Although Buster McGee loves everyone; Animals, Dogs and other animals, He is very frustrated with his new cat Mr. Magoo. Mr. Magoo does not seem to share his affection. Mr. Magoo, being a cat, takes joy in torturing Buster Mcgee. Mr. Magoo likes to sit on the other side of the pet gate when Buster McGee is locked in the Front Room. He is in sight, but not in reach. Poor Buster McGee, he just wants to play with Mr. Magoo.

Buster McGee loves to be scratched on his belly and right above his tail.  It is the best way for him to start his morning, and he appreciates his Dad for starting his days in such a great way. Buster McGee knows lots of tricks, including “Rolling Over”, “Waving Goodbye” and “Touch and High 5.” Buster McGee has never met a treat that he does not like but he especially loves Pup-peroni, dehydrated chicken tenders and Hamburgers. Mmmm Yum Yum. Buster is very loyal and devoted to his Dad, as his Dad is to him too. We all love seeing buster McGee here at Ruffledale and are excited for his weekly visit. It wouldn’t be the same on Wednesday’s without him. He is so silly and jovial he reminds us all that we should always just be happy in life.