SEPTEMBER DOG OF THE MONTH SHILOH!!! 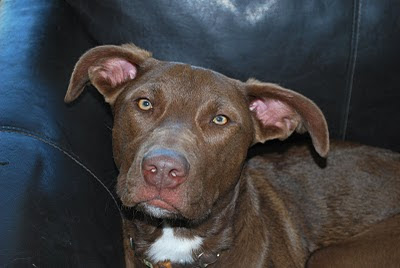 Shiloh is a wild and crazy Catahoula and Lab mix who comes regularly to daycare here at Ruffledale! She just turned a year old in July (her family isn’t exactly sure of the date since she was a “pound puppy”)! Shiloh is always so happy while she is here, really she is happy all the time. Shiloh has been coming to Ruffledale since she was about 7 months old. We’ve all loved watching her grow up! Shiloh loves everyone. One of her best friends is Charlie, the 140 pound great dane mix, but she also loves her “little” friends and any other dog she comes across! All dogs are greeted by Shiloh with very boistrous and happy “kisses.” Shiloh has never met a dog she doesn’t love.

When Shiloh is hangin’ out at home her favorite thing to do is run free on the family ranch. Of course, she loves to chase the chickens, horses and butterflys, and if there is a mud puddle of any kind she finds it to dig in. We also have heard a little rumor that she loves to eat chicken poop, she thinks it’s quite yummy!!

Shiloh is definitely A special pup, she has survived a lot during her first year. She was rescued by her mom from a shelter Ten hours Roundtrip from her house! She saw shiloh online and new that they would have a special bond. She drove all the way there to take her home. After making it to her new home, her mom discovered she was suffering from a severe bladder infection. Not long after, she discovered Shiloh had Parvo!! With her families love and care she survived both of these ailments. When they thought the worst had passed shiloh GOT A blockage FROM SOMETHING NAUGHTY SHE ATE. LUCKILY AFTER A LITTLE BIT OF BEING SICK SHE FINALLY PASSED THE BLOCKAGE AND AVOIDED SURGERY. then SHE HAD TO HAVE a dew claw surgery! POOR SHILOH! It was not over yet though, Shiloh thought it would be interesting to run through a barbed wire fence (bad idea,) she had to be rushed to the vet for stitches!

We all love seeing shiloh at daycare, Her happiness does reflect on us and the other pups, she brightens everyones day!!!