Juan has been a regular pal at Ruffledale since we opened our doors in 2004!!! His brother Jake came into the picture more recently.  Jake was boarding at Ruffledale when his Dad decided he couldn’t keep him anymore.  After living here at Ruffledale for just a little while Juan’s Mom decided to make them “brother’s.”  Now Juan and Jake are quite a pair.  They are their Mom’s “Babies!!” and her “Life” (Despite their combined weight of over 150 pounds!”)

Juan is a black lab who loves to play.  His birthday is April 29th making him a Taurus pup, also known as “The Supporter.”  This fits Juan because him Mom describes him as her “Angel.”  He has helped her through so many hard times and has been her support through so much.  Juan is so in tune to his Mom’s emotions.  Juan is such a happy-go-lucky dog.  Juan loves his ears, butt and legs scratched.  If you start with scratching his spots, you may be there all day.  Juan also likes to ‘steal’ things so that you have to chase him around for them.  At home his favorite is the remote controls; at daycare it is water bottles, business cards, paper towels, cell phones and anything else.  He just loves the attention he gets when we are all chasing him in circles.
Jake is the more mellow dog of the two.  He is much more relaxed about life.  He would just eat and chill in front of the TV all day if it was by his choice.  Jake is a Great Dane mix.  He is also all black, with a little white spot on his leg from a orthopedic surgery when he was younger.   His first day home with his new family was a little scary.  But once he realized that they already loved him so much, he quickly came to love his new “Mami” and “Papi” and especially Juan.  Jake is a big boy who thinks he is little.  He loves it when he is being rubbed.  He will lean into you until you almost fall over, and will block you in your path if he wants to be petted.  Jake has a guessed birthday of December 29th. 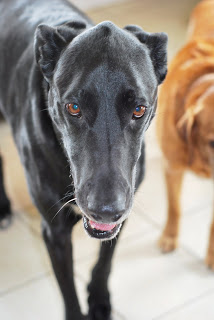 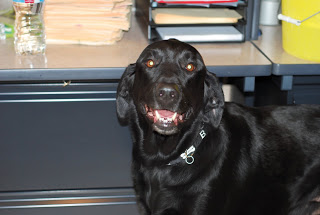